Computational biochemists have unveiled an unprecedented dichotomy in enzymatic catalysis, in which two enantiomeric substrates bind XimE in two distinct fashions and give two different epoxide ring opening products! Is there Baldwin’s Rules or something else? Obviously, there is no simple rule for the pyranocoumarin and furanocoumarin formation. 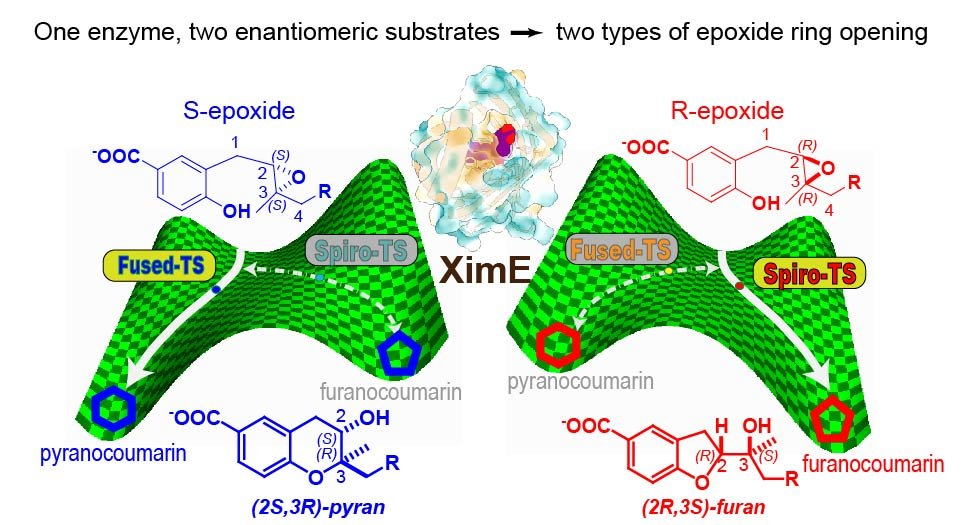 The computational labs of Shanghai Jiao Tong University (SJTU) and UCLA shows the different binding modes of the enantiomers and how catalysis occurs in Prof. Min-Juan XU’s experiments. (https://pubs.acs.org/doi/abs/10.1021/acscatal.1c01335) The conversion of hydroxyl epoxides to furans or pyrans is a classic problem related to the well-known Baldwin’s Rules for Ring Closure. However, no simple rule, Baldwin’s or otherwise, explains this usual dichotomous phenomenon, which may be related to enzyme evolvability in biosynthesis.

Enzyme promiscuity are pivotal in biocatalytic engineering and directed evolution. In the xiamenmycin biosynthesis of Streptomyces xiamenensis 318, the pyran ring of 3-chromanol xiamenmycin B is formed via S-epoxidation of an olefin precursor 3-geranyl-4-hydroxybenzoate by a FAD-dependent oxidoreductase (XimD). Accidentally XimE is also able to catalyze a different reaction of the enantiomeric R-epoxide to furanocoumarin. These α + β barrel enzymes are observed in biosynthesis of nogalamycin, aclacinomycin, aurovertin…. Owing to the particular importance for polyether pharmaceutics, enzymatic epoxide ring opening has been extensively interrogated in both the catalytic antibody and biosynthetic enzymes.  Whether the catalysis follows or not follows the famous Baldwin’s rules has been argued for several decades in academics. 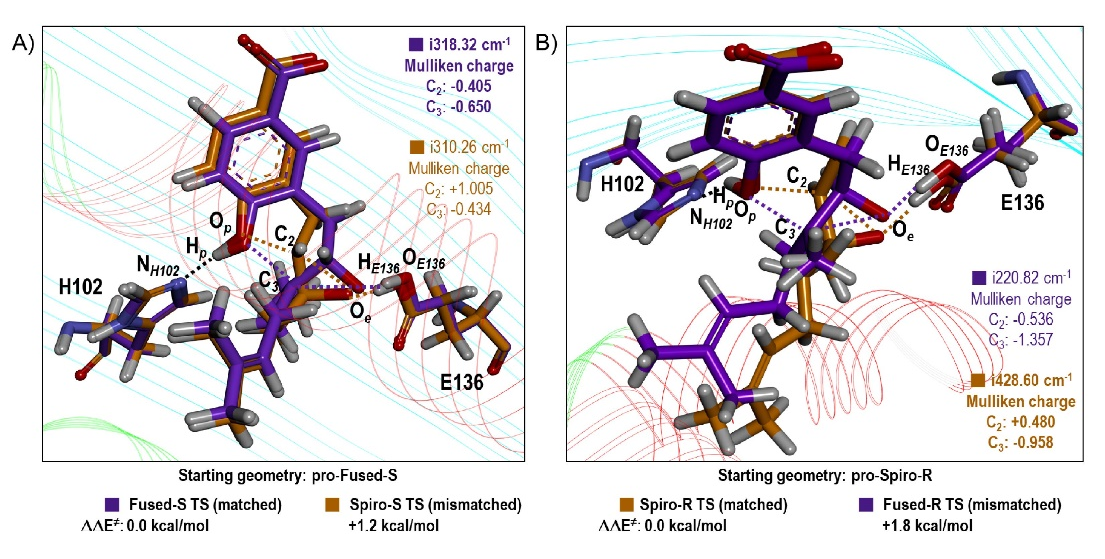 Such a dichotomy is very rare, perhaps unprecedented, but ZHAO’s computations lead to an in-depth explanation of how this works at the atomic and molecular levels. The findings are of interest to a wide range of researchers in the fields of biosynthesis, enzyme catalysis, and of course synthetic and physical organic chemists interested in the regiochemical control related to Baldwin’s rules.

This work is collaborated with Prof. K. N. Houk at UCLA and Prof. Min-Juan XU at SJTU. Two graduate students, Miss Chuchu JIANG and Mister Bei-Bei HE, in the School of Life Sciences and Biotechnology at SJTU, are the first and second authors of this paper, respectively. The authors acknowledge the grants from the National Key Research and Development Program of China, the National Science Foundation of China, MOE Joint International Research Laboratory of Metabolic & Developmental Science, and Qingdao National Laboratory for Marine Science and Technology.